No ifs, no buts - CCLA assessment of the latest Bank of England rate decision The Bank of England’s Monetary Policy Committee (MPC) has voted to increase its Official Bank Rate by 0.50% to 1.75% - its highest rate since 2008. The Bank’s move was the biggest single increase since 1995, also marking the sixth consecutive rate hike since last December.

Eight of the MPC’s nine members voted to raise interest rates by this margin. The MPC said that policy was “not on a pre-set path”, hinting that the 0.50% increase was not necessarily the first of several. That said, it did leave open the possibility of another bumper move in September if the economic data warranted it, however with the Bank posting an especially gloomy picture for UK economic prospects, this possibility looks less likely.

Following the announcement and the Bank’s latest economic forecasts, market expectations for the path of Bank Rate shifted lower as we move into 2023. Investors now see rates peaking at around 2.80% in the second quarter of next year, down from around 3.35% in June. 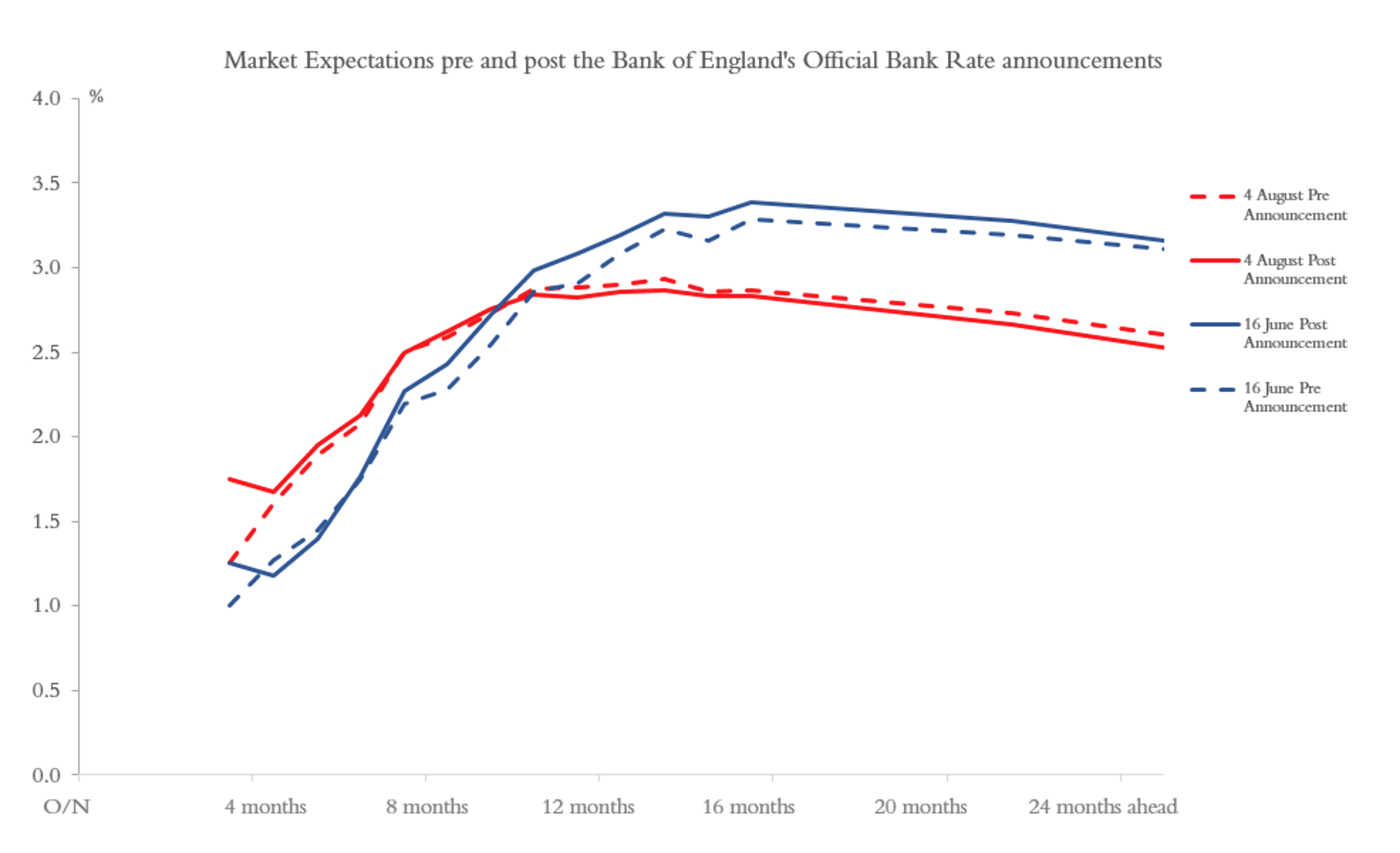 Coming into the latest meeting of the MPC, a rate increase was a near certainty, with the main talking point centred around whether it would continue with its previous approach of 0.25% increments or pivot to a similar path to the other major central banks and vote for a larger basis point increase. Two weeks before the meeting, markets implied a near 100% chance of a 0.50% increase. However, this probability had fallen back to around 80% immediately before the decision.

Pressure had been growing on the Bank to keep pace with other central banks and tighten policy at a similar rate, especially given the latest reading of domestic inflation, which was again among the highest of the G7 group economies. This was even before recent wholesale rises in energy prices were reflected in the inflation measure in October. The following chart shows that despite starting their hiking cycle comparably early, the BoE was starting to lag its peers outside of Europe: 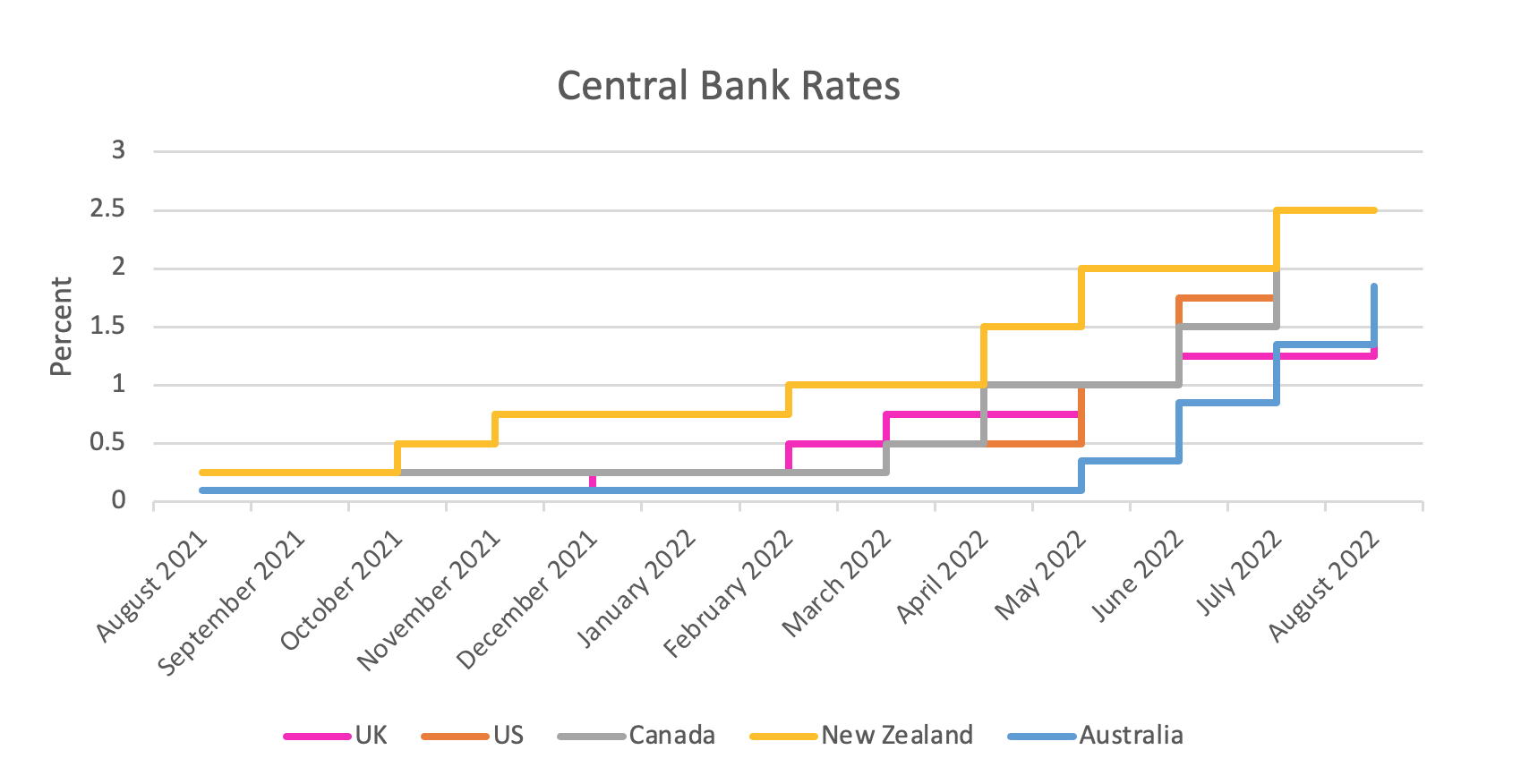 Despite the 50-basis point increase and almost unanimous vote (which would usually be expected to support the currency), the pound fell by as much as 0.4% to $1.209 after the news, while the yield on the 10-year gilt fell 0.02% to 1.89% as markets digested the MPC’s downbeat communications and accompanying economic projections.

The rationale behind the increase

The Bank is very concerned that inflationary pressures are becoming “more persistent and broadening”. In its Monetary Policy Report, the Bank points out that many companies have been raising prices, pushing consumer costs. The continued acceleration of the cost of living and prospects for an even faster inflation rate appears to justify the MPC’s latest decision. The Governor reiterated his recent Mansion House comment, “there are no ifs or buts in our commitment to the 2% inflation target. That’s our job, and that’s what we will do.”

Consumer Price Index (CPI) inflation is now expected to peak at 13.3% compared to 10.2% previously forecast in May. To put this rapid ascent into context, a year ago, the MPC was forecasting that inflation would peak at just 4%. The latest revision was due to the expectation that the Ofgem price cap will now rise by 75%, compared to 40% previously assumed in May. The expected peak in CPI would be over 11% above the Bank’s 2% target, and it is expected to remain far more persistent throughout the whole of 2023. Worryingly, the inflation rate is still expected to remain above the present figure of 9.4%, a 40-year high, all the way through to September 2023.

Price pressures have intensified since the Bank’s previous meeting. Food and petrol prices continued to pick up, and producer prices have risen to a 45-year high. According to Bloomberg, close to 90% of the UK’s consumption basket is now above the Bank’s 2% target and 54% of the 85 CPI components are now recording price growth above 6%. It is therefore clear that high inflation has transformed into a more broad-based problem and is becoming more prevalent in the services sector where it often proves to be more long lasting.

Taking this into account, the threat of “second-round” effects, where businesses raise prices and workers seek higher wages, becomes greater, and it is these effects which now seem to be most concerning the Bank.

Looking further ahead, the Bank’s latest assessment shows inflation remarkably dropping back to 2% in two years’ time and then falling even further to 0.8% in three years’ time.

The Bank also points to the UK’s ‘tight’ labour market as fuelling the potential “second-round” effects, thereby signalling that it is worried about a wage-price spiral:

“In a tight labour market and an environment in which companies were finding it easier to pass on price increases, a higher and more protracted path for CPI inflation over the next 18 months could increase the risk that an eventual decline in external price pressures would not be sufficient to restrain expectations of above-target inflation further ahead.”

Wage growth is presently well above the level consistent with the Bank’s target. In the latest data release, the economy also added 296,000 jobs from the previous quarter (ONS), showing labour is still in strong demand, even if rising participation has meant a slightly higher unemployment rate than the MPC’s forecast. That said, there are still 1.3 million vacancies, broadly matching the number of unemployed people, while the number of individuals changing jobs is at a record high. This indicates that there remains the potential for further wage growth in the near term.

However, looking further ahead, the Bank forecasts that wage pressures will adjust down quickly as inflation falls back. Furthermore, the combination of further rate increases, the start of quantitative tightening, a drop in disposable income and slower global growth should result in slightly higher unemployment by the end of this year and therefore leading to a slower pace of rate increases, or even a halt.

The risk of recession

The Bank has cut its growth forecasts, and now sees the economy shrinking from October 2022. The MPC is now projecting a recession continuing into mid-2024, marking a significant downgrade relative to its previous May forecast. Forward indicators are supporting this view, this week we have seen the Services Purchasing Managers Index (representing around three quarters of the economy) revised down to the levels witnessed at the start of COVID. In a warning about the economic outlook, the Bank said:

With wages rising at around half the rate of inflation, the Bank forecasts show that a household income decline of more than 5% would be the worst since records began in the 1960s. Even with households running down their savings, the Bank expects consumer spending to fall over the next year, dragging down economic growth. The Bank projects output falling by around 2.1% from peak to trough, a recession would be comparable to that seen in the early 1990s. That’s much shallower than the recessions experienced during either the pandemic or the global financial crisis. Even when the recession ends, the Bank warns that economic growth is expected to be “very weak by historical standards.”

It’s unclear when GDP is expected to return to its pre-recession level.

With the Bank Rate now in excess of 1%, the MPC has triggered its self-imposed threshold at which it would “consider” the active sales of gilts held in its Asset Purchase Facility. Unlike the US Federal Reserve's decision to commence selling its stockpile three months ago, in May, the MPC only asked the Bank of England staff to work on a strategy for sales.

The Bank has confirmed that it intends to start active government bond sales worth around £10 billion a quarter from next month:

"The Committee is provisionally minded to commence active sales shortly after its September meeting, subject to economic and market conditions being judged appropriate and to a confirmatory vote at that meeting."

The Bank will announce a programme of auctions at the start of each quarter. Auctions will be held for multiple gilts in maturity buckets of 3-7 years, 7-20 years, and longer than 20 years, with an auction for each bucket taking place every two weeks.

The future path for Bank Rate

The opposing outlooks for growth and inflation show how stagflationary the UK economy appears presently. Despite the economic backdrop, the Bank is unlikely to pause its current hiking cycle until it sees clear signs the aforementioned labour market is loosening and inflation is falling rapidly to its target level. Given the latest forecasts from the Bank, this still appears to be some way off.

We expect the MPC to continue its rate hiking cycle for the rest of this year. Still, the pace of tightening will likely drop back to 0.25% at the September meeting in light of the continued decline in economic indicators, especially given some changes in the membership of the MPC. We now expect Bank Rate to exceed 2% by the end of the year, but should the economic environment worsen and inflation expectations fall substantially, it could peak during 2023 below the current market assumption of 2.75%/3.00% (see the chart below). 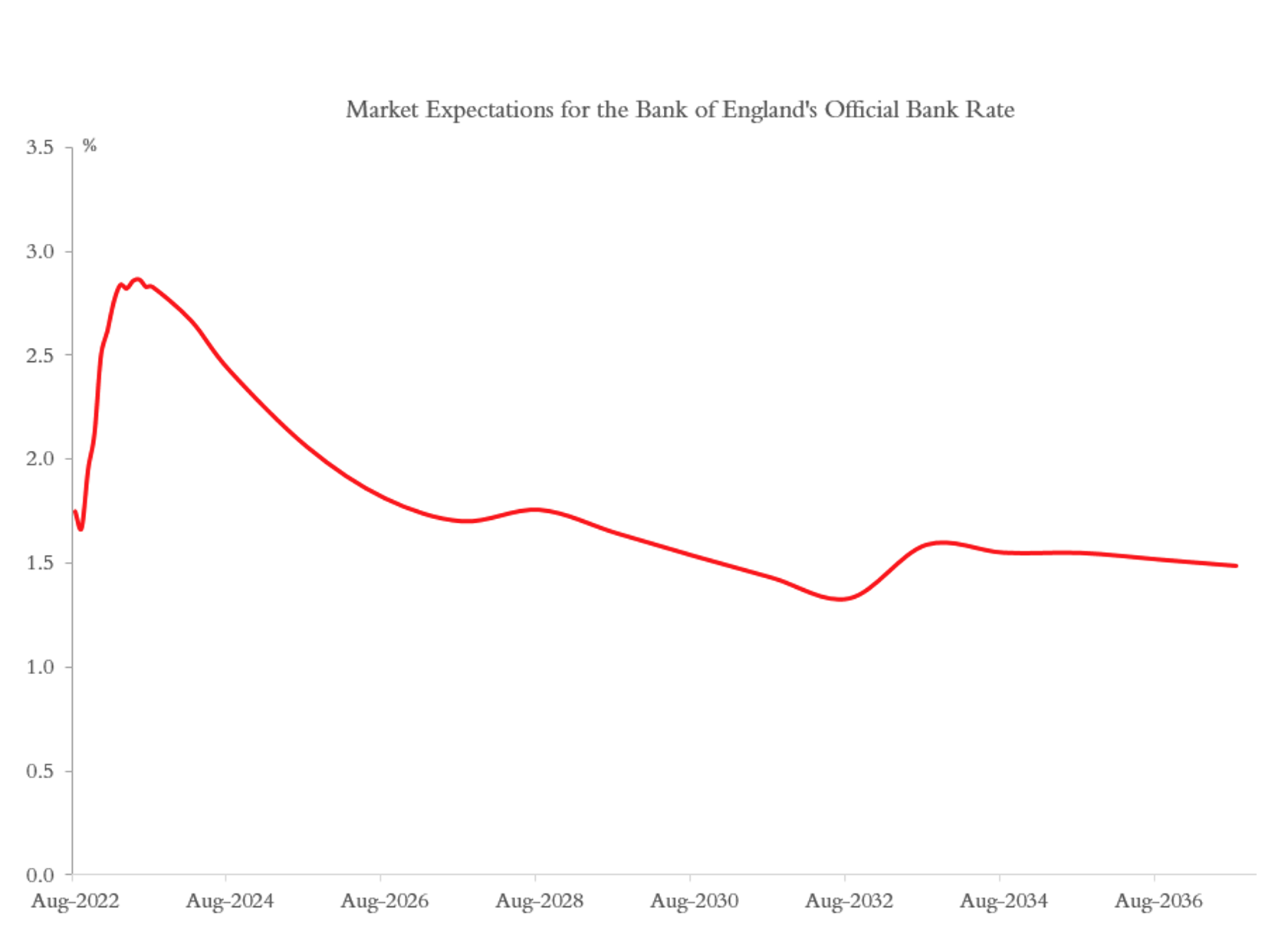 With MPC guidance divided, confidence in our assessment is not high, with the potential remaining for further 0.50% hikes, most likely in September. With other central banks shifting to larger rises, relatively lower UK interest rates could reduce the strength of the pound, raising imported inflation and forcing the Bank to act further. Additionally, both Conservative leadership candidates are proposing tax cuts that have the potential to add further inflationary pressures.

Since the start of the year, we have been positioning the investments within our three cash funds to allow for their net yields to react quickly to this new rate environment. Using CCLA’s Public Sector Deposit Fund (PSDF) as an example, within the next seven days, 51% of the holdings will have been rolled over at the new higher rates, 60% within a month and 77% in less than three months. Therefore, we should see a relatively quick readjustment in their net yields.

Given the volatility we have witnessed over recent months at the longer end of the curve, we have been reluctant to overextend the funds into these periods, thereby protecting mark-to-market values in the process. However, this approach has excluded us from some of the attractive yields in these periods. We expect the PSDF net yield to be around the 1.50% level as of close of business on Friday.

This document is a financial promotion and is issued for information purposes only. It does not constitute the provision of financial, investment or other professional advice.

To ensure you understand whether a CCLA product is suitable, please read the key investor information document and the prospectus. CCLA strongly recommends you seek independent professional advice before investing.

In addition to the general risk factors outlined in the prospectus, investors should also note that purchasing PSDF shares is not the same as making a deposit with a bank or other deposit-taking body and is not a guaranteed investment.

Although it is intended to maintain a stable net asset value per share, there can be no assurance that it will be maintained. Notwithstanding the policy of investing in short-term instruments, the value of the PSDF may also be affected by fluctuations in interest rates. The PSDF does not rely on external support for guaranteeing the liquidity of the fund or stabilising the net asset value per share. The risk of loss of principal is borne by the shareholder. Past performance is not a reliable indicator of future results. The value of investments and the income derived from them may also fall and rise.  Investors may not get back the amount originally invested and may lose money. Any forward-looking statements are based upon CCLA’s current opinions, expectations and projections. CCLA undertakes no obligations to update or revise these. Actual results could differ materially from those anticipated.

Investment in a CCLA managed fund is for public sector eligible investors only.